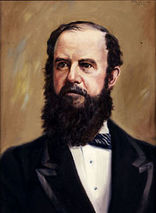 Description:
Sir Anthony Musgrave KCMG (31 August 1828 &ndash; 9 October 1888) was a colonial administrator and governor. He was born at St John’s, Antigua, the third of 11 children of Anthony Musgrave and Mary Harris Sheriff. He died in office as Governor of Queensland in 1888.

After education in Antigua and Great Britain, he was appointed private secretary to Robert James Mackintosh, governor-in-chief of the Leeward Islands in 1854. He was recognised for his "capacity and zeal", and quickly promoted, administering in turn the British West Indies territories of Nevis and St. Vincent and the Grenadines.

After ten years of colonial service in the Caribbean, Musgrave was appointed governor of Newfoundland in September, 1864. Unlike his previous appointments, Newfoundland had responsible government and an active colonial assembly. He also found a colony in dire economic straits, containing a destitute population. During his tenure, Musgrave dedicated most of energies towards convincing Newfoundland to remedy this by joining the negotiations with other British North American colonies towards union in what would become the Canadian Confederation. In this project, he was allied with the goals of the colonial office. Despite his efforts, and what seemed like imminent success, Musgrave ultimately failed to move the colonial assembly to accepting terms of union. Canada was proclaimed on 1 July 1867&mdash;and Newfoundland would not join...
Read More