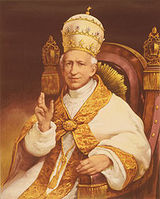 Description:
Apostolicae Curae is the title of a papal bull, issued in 1896 by Pope Leo XIII, declaring all Anglican ordinations to be "absolutely null and utterly void". The Anglican Archbishops of Canterbury and York of the Church of England responded to the papal charges with the encyclical Saepius Officio in 1897.

The principal objection to Anglican orders being valid, according to Leo XIII, was the alleged deficiency of intention and of form of the Anglican ordination rites. In the case of deficiency of intention, the pope declared that the rites expressed an intention to create a priesthood different from the sacrificing priesthood of the Roman Catholic Church and reduce ordination to a mere ecclesiastical institution, an appointment or blessing, instead of a sacramental conferral of actual grace by the action itself.

The view of many Anglican bishops and apologists was that the required references to the sacrificial priesthood never existed in many ancient Latin Rite ordination liturgies, or in certain Eastern Rite ordination liturgies that the Roman Catholic Church considered to be valid. Many Roman Catholic apologists, including English bishops, asserted that those Eastern Rite forms adequately described the powers proper to a bishop, including his supreme priesthood and the ordination of priests, deacons and subdeacons, thus confirming the true intention and meaning of the rite.

Prior to Apostolicae Curae,...
Read More