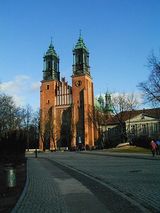 Description:
The Archcathedral Basilica of St. Peter and St. Paul in Poznań is one of the oldest churches in Poland and the oldest Polish cathedral, dating from the 10th century. It stands on the island of Ostrów Tumski north-east of the city centre.

The cathedral was originally built in the second half of the 10th century within the fortified settlement (gród) of Poznań, which stood on what is now called Ostrów Tumski ("Cathedral Island"). This was one of the main political centres in the early Polish state, and included a ducal palace (excavated by archaeologists since 1999, beneath the Church of the Virgin Mary which stands in front of the cathedral). The palace included a chapel, perhaps built for Dobrawa, Christian wife of Poland's first historical ruler, Mieszko I. Mieszko himself was baptised in 966, possibly at Poznań – this is regarded as a key event in the Christianization of Poland and consolidation of the state. The cathedral was built around this time; it was raised to the status of a cathedral in 968 when the first missionary bishop, Bishop Jordan, came to Poland. Saint Peter became the patron of the church because, as the first cathedral in the country, it had the right to have the same patron as St. Peter's Basilica in the Vatican. The pre-Romanesque church which was built at that time was about 48 meters in length. Remains of this building are still visible in the basements of today's basilica. The first church survived for about seventy...
Read More