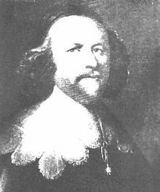 Description:
Archibald Johnston, Lord Warriston (1611–1663) was a Scottish judge and statesman, son of James Johnstone (died 1617), a merchant burgess of Edinburgh. He was baptised on 28 March 1611, educated at Glasgow, and admitted to the Faculty of Advocates in 1633.

He first came into public notice in 1637, during the attempt of Charles I to force an Episcopalian liturgy upon Scotland, when as the chief adviser of the covenanting leaders he drew up their remonstrances. On 22 February 1638, in reply to a royal proclamation, he read a strong protestation to an enormous multitude assembled at the mercat cross in Edinburgh. Together with Alexander Henderson he was the author of the National Covenant of 1638, drawing up himself the second part, which consisted of a recapitulation of all the Acts of Parliament which condemned "popery" and asserting the liberties of the Scottish church.

He was appointed clerk to the tables, and also clerk and afterwards procurator or counsel to the General Assembly held at Glasgow the same year, when he discovered and presented several missing volumes of records. In June 1639 he took part in the negotiations leading to the Pacification of Berwick, ending the first Bishops War, when his firm attitude was extremely displeasing to the king. After Charles promised a new Assembly and Parliament to settle the church question, Johnston responded by accusing him of playing for time, to which the king replied in anger "that...
Read More