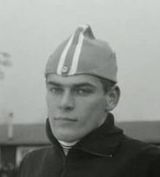 Description:
Adrianus "Ard" Schenk (born 16 September 1944) is a former speed skater from the Netherlands, who is considered to be one of the best in history. His first Olympic success came in 1968, when he won a silver medal at the 1968 Winter Olympics. Between 1970 and 1972 Winter Olympics, Schenk won three consecutive World Allround Speed Skating Championships. He won three gold medals at the 1972 Winter Olympics, becoming, along with Galina Kulakova of Soviet Union, the most successful athlete there. He was born in Anna Paulowna, North Holland.

In the early 1970s Schenk dominated international speed skating. His career peaked in 1972, when in addition to winning three gold medals during the Olympic Games in Sapporo (a fall on the 500&nbsp;m caused him to miss the opportunity to win gold in all 4 distances), he also won the European Allround and the World Allround Championships. He became World Allround Champion by winning all 4 distances, a feat that nobody had performed since Ivar Ballangrud 40 years earlier. In addition, he won bronze that year at the World Sprint Championships. By the end of the season, he held all world records except for the 500&nbsp;m. The next season (1973), he turned professional with a number of other prominent speed skaters, thereby foregoing the opportunity of winning more championships. The professional circuit lasted two seasons and Schenk retired from speed skating at the relatively young...
Read More