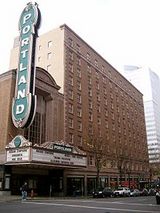 Description:
The Arlene Schnitzer Concert Hall (1928), opened as the Portland Publix Theater before becoming the Paramount after 1930, is a historic theater building and performing arts center in Portland, Oregon, United States. Part of the Portland Center for the Performing Arts, it is home to the Oregon Symphony, Portland Youth Philharmonic, Metropolitan Youth Symphony, White Bird Dance Company, and Portland Arts & Lectures. It is also a concert and film venue. Originally (and sometimes still referred to as) the Paramount Theatre, it is also locally nicknamed "The Schnitz".

It is the last surviving theater building on Broadway, which was once lined with large theater houses.

The architectural firm Rapp and Rapp, famous for its theater buildings, designed the Italian Renaissance-style building. The building was variously described by the newspapers as being of the French Renaissance or Northern Italianate style. The Paramount was considered, at its opening, to be the largest and most lavish theater for a city the size of Portland. Originally opened as the Portland Publix Theatre, a vaudeville venue in March 1928,Erickson, Steve (Sep. 5, 1984). "Arts center...
Read More