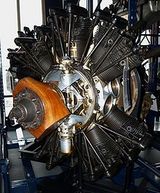 The Jaguar was developed from the Royal Aircraft Factory RAF.8 design proposal of 1917, and was engineered to use a gear driven supercharger. First run on 21 June 1922 initial performance was not as expected, as a result the bore was increased to 5.5 in (139.7 mm) with all variants after the Jaguar I using this dimension. Throughout its career the Jaguar suffered from vibration due to a lack of a crankshaft centre bearing.