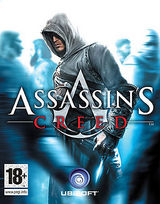 Description:
Assassin's Creed is an award-winning historical third person, stealth action-adventure video game developed by Ubisoft for Microsoft Windows, PlayStation 3 and Xbox 360. The bulk of the game takes place during the Third Crusade, with the plot revolving around a sect known as the Secret Order of Hashshashin (Assassins). The player is in reality playing as a modern-day man named Desmond Miles, who through the use of a machine named the "Animus", is allowed the viewing and controlling of the protagonist's genetic memories of his ancestors, in this case, Altaïr ibn-La'Ahad, a member of the Assassins.

Through this plot device, details emerge of a struggle between two factions, the Knights Templar and the Assassins, over an artifact known as a "Piece of Eden", and the game primarily takes place during the Third Crusade in the Holy Land in 1191. The game received generally positive reviews, and won several awards at E3 in 2006. The story of a separate assassin, Assassin's Creed II, was released in November 2009. The sequel to Assassin's Creed II, Brotherhood, was released in November 2010.

Desmond Miles, a bartender, is kidnapped by the Abstergo Corporation. There, Desmond is forced to lie in the Animus, a device that is able to replay the genetic memories of the user's ancestors. In Desmond's case, they seek information about his ancestor Altaïr ibn La-Ahad, an assassin during the time of the Third Crusade. Within the Animus, Altaïr's memories reveal...
Read More