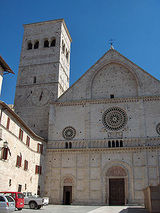 Description:
Assisi Cathedral ( or Cattedrale di San Rufino di Assisi), dedicated to San Rufino (Rufinus of Assisi) is a major church in Assisi, Italy, that has been important in the history of the Franciscan order. In this church Saint Francis of Assisi (1182), Saint Clare (1193) and many of their original disciples were baptised. It was on hearing Francis preaching in this church in 1209 that Clare became deeply touched by his message and realized her calling. Tommaso da Celano relatedTommaso, Vita I, chap. XVIII. that once Saint Francis was witnessed praying in this church while, at the same time, he was seen jumping on a chariot of fire in the Porziuncola.

This stately church in Umbrian Romanesque style was the third church built on the same site to contain the remains of bishop Rufinus of Assisi, martyred in the 3rd century. The construction was started in 1140 to the designs by Giovanni da Gubbio, as attested by the wall inscription visible inside the apse. He may be the same Giovanni who designed the rose-window on the façade of Santa Maria Maggiore in 1163.

In 1228, while he was in Assisi for the canonization of Saint Francis, Pope Gregory IX consecrated the high altar. Pope Innocent IV inaugurated the finished church in 1253.

The Romanesque façade was built with stones from the Monte Subasio. It is a typical example of the style found in 12th-century churches of Umbria. This façade is divided in three sections.