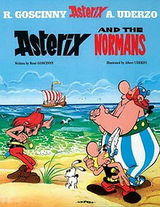 Asterix And The Normans

Asterix and the Normans

Description:
Asterix and the Normans is the ninth book in the Asterix comic book series, written by René Goscinny and drawn by Albert Uderzo. It was first published in serial form in Pilote magazine, issues 340-361, in 1966. It depicts a meeting between Asterix's Gaulish village and a shipload of Normans (Vikings).

The story begins with Vitalstatistix receiving a missive from his brother Doublehelix in Lutetia (modern-age Paris) who wants his aid in making a man of his teenage son, Justforkix.

Justforkix arrives in a sports car-like chariot, and comes across as a happy-go-lucky so-and-so with an air of superiority about him. Conflict soon emerges between the city boy and the country folk. The village holds a dance in honour of his arrival but he is unimpressed by the simple traditional way of dancing, snatches Cacofonix's lyre and sings and plays in the manner of Elvix Preslix (the Rolling Menhirs in the English version). Some of the younger villagers soon catch on and dance to this new form. Outraged by this usurpation, Cacofonix tries to show off his own skills, but this of course leads to the break-up of the dance and a knock-out blow from Fulliautomatix. Justforkix on the other hand is impressed and suggests that Cacofonix's talents would be better appreciated in Lutetia. On the whole, though, Justforkix is quickly bored with the village. This changes, however, when a Norman ship arrives.

The Normans (actually Vikings from the frozen north) have decided to come to Gaul...
Read More