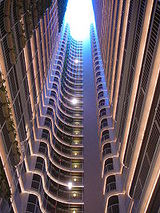 Description:
In modern architecture, an atrium (plural: atria) is a large open space, often several stories high and having a glazed roof and/or large windows, often situated within a larger multistory building and often located immediately beyond the main entrance doors. Atria are a popular design feature because they give their buildings "a feeling of space and light." Fire control is an important aspect of contemporary atrium design due to criticism that poorly designed atria could allow fire to spread to a building's upper stories more quickly.

The Latin word atrium referred to the open central court, from which the enclosed rooms led off, in the type of large ancient Roman house known as a domus. The impluvium was the shallow pool sunken into the floor to catch the rainwater. Some surviving examples are beautifully decorated. The opening in the ceiling above the pool called for some means of support for the roof. And it is here where one differentiates between five different styles of atrium. As the centrepiece of the house the atrium was the most lavishly furnished room. Also, it contained the little chapel to the ancestral spirits (lararium), the household safe (arca) and sometimes a bust of the master of the house.

The term was also used for a variety of spaces in public and religious buildings, mostly forms of arcaded courtyards, larger versions of the domestic spaces. Byzantine churches were often entered through such a space (as are many mosques,...
Read More