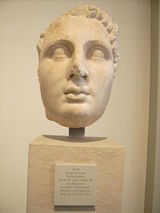 Description:
Attalus II Philadelphus (Greek: Attalos II Philadelphos, Ἄτταλος Β' ὁ Φιλάδελφος, which means "Attalus the brother-loving", 220 BC – 138 BC) was a King of Pergamon. He was the second son of Attalus I Soter and wife queen Apollonis (?), and ascended the throne first as co-ruler alongside his ailing brother Eumenes II in 160 BC, whose widow Stratonice of Pergamon he married in 158 BC upon Eumenes' death.

Prior to becoming King, Attalus was already an accomplished military commander. In 190 BC, he resisted an invasion by the Seleucids and the following year (189 BC) led his forces to fight alongside the Roman Army under Gnaeus Manlius Vulso in Galatia. In 182 BC he again fought the Seleucids, successfully meeting the army of Pharnaces I of Pontus. Finally, he assisted the Romans again in 171 BC, joining Publius Licinius Crassus in Greece for the Third Macedonian War.

Attalus II also made frequent diplomatic visits to Rome, and gained the esteem of the Romans. At one point, they offered him assistance to overthrow his brother, but he declined. After he became King, they assisted him in his own battles against Prusias II in 156 BC – 154 BC and sided with him in helping pretender Alexander Balas to seize the Seleucid throne from Demetrius I in 150 BC and Nicomedes II Epiphanes seize the Bithynian throne from his father Prusias II the following year.

Attalus II expanded his kingdom with the help of his good friend Ariarathes V of Cappadocia, and...
Read More