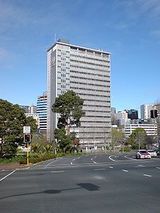 Description:
Auckland City Council was the local government authority representing Auckland City, New Zealand, and was amalgamated into the Auckland Council on 1 November 2010. It was an elected body representing the 404,658 residents (2006 census) of the city (which included some of the Hauraki Gulf islands such as Waiheke Island and Great Barrier Island). It was chaired by the Mayor of Auckland.

In the financial year ending June 2007, Auckland City Council had operating revenue of NZ$552 million, of which 68% came from Council rates, which were NZ$859 per ratepayer on average. It expended NZ$343 million on capital projects, of which 45% went to 'transport' expenses, 19% to 'property and asset management' and 17% to 'open spaces, parks and streetscapes', while 10% were spent on 'stormwater and waste management'. Another 7% were spent on 'arts and culture' and 2% on 'zoo, recreational facilities and community development'. The operating surplus was NZ$40.3 million.

Amongst its other functions, the city council administered more than 700...
Read More