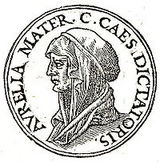 Aurelia Cotta was a daughter of Rutilia and Lucius Aurelius Cotta. Her father was consul in 119 BC and her paternal grandfather of the same name was consul in 144 BC. The family of the Aurelii Cottae was prominent during the Roman Republican era. Her mother Rutilia, was a member of the gens Rutilius cognominated Rufus. They were of consular rank.

Aurelia married a praetor Gaius Julius Caesar. Her husband died 85 BC – 84 BC. Their children were:

The historian Tacitus considers her an ideal Roman matron and thinks highly of her. Plutarch describes her as a "strict and respectable" woman. Highly intelligent, independent and renowned for her beauty and common sense, Aurelia was held in high regard throughout Rome.

Aurelia and her family were very influential in her son’s upbringing and security. Her husband, the elder Gaius Caesar, was often away, so the task of raising their son fell mostly on Aurelia's shoulders. When the younger Caesar was about 18, he was ordered by the then...... ...
Read More