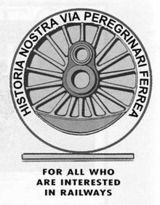 Description:
The Australian Railway Historical Society (ARHS) was founded in Sydney in 1933 as The Australasian Railway and Locomotive Historical Society. It aims to foster an interest in the railways, and record and preserve many facets of railway operations. Membership now exceeds 2,500, with Divisions in every state and the A.C.T. The Society's name was changed to the present form in 1952.

Each Division has published and supported publishing of books and pamphlets about the history of regional railways. Significantly Divisions have been the main resource of expertise in creating centenary and other anniversary publications regarding rail history. The New South Wales Division has a shop based in Rail Heritage Central, Main Concourse at Central Station in Sydney.

Some Divisions maintain a local railway museum, for example Bassendean in Western Australia, Williamstown Railway Museum in Victoria and the Canberra Railway Museum. In South Australia SteamRanger operates the former Mount Barker to Victor Harbor line as a working museum. The Victorian division of the Society also played a role in the preservation of steam locomotives in Victoria from the 1960s.

Each Division publishes magazines, at various frequencies. A dedicated magazine for the whole of Australia is also published, now called Australian Railway History, and this includes historical material from all states.