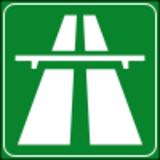 The Autostrada is the Italian national system of motorways. The total length of the system is about 6,400&nbsp;km. In North and Central Italy this is mainly as tollways, with the biggest portion in concession to the Atlantia group which operates some 3,408&nbsp;km. Other operators include ASTM and ATP in the north-west, Serenissima and Autovie Venete in the north-east, SALT and Autocisa in the center, all under the control of the state-owned ANAS.

Italy was the very first country in the world to start building motorways, i.e. fast roads reserved to motor vehicles. The "Milano-Laghi" motorway (connecting Milan to Varese) was in fact devised by Piero Puricelli, a civil engineer and entrepreneur, who received the first authorizations to build a "public utility" fast road in 1921, and completed the construction (back then one lane per direction was enough) between 1924 and 1926. By the end of the 1920s, over 4,000 kilometers of multi-lane motorways were constructed throughout Italy, linking many cities and rural towns to one another. The motorways were touted by Benito Mussolini in 1930 as one of the great achievements of his regime and the proof of its commitment to progress and modernization, whereas the original idea was thought of earlier. Lore has that the US...
Read More