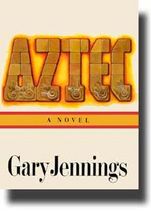 Description:
Aztec is a historical fiction novel by Gary Jennings. It is the first of five novels in the Aztec series.

The book is written as a series of letters from the Bishop of the See of New Spain to King Carlos of Spain containing a transcribed biography of Mixtli (Full named Chicóme-Xochitl Tliléctic Mixtli, "Seven Flower Dark Cloud", in Nahuatl), an elderly Aztec man, by Spanish Catholic monks during the 16th century.

The novel portrays the entirety of the life of Mixtli-Dark Cloud, who is asked by Bishop Juan de Zumárraga to tell about his life, since King Carlos I of Spain (Charles V, Holy Roman Emperor) wants a chronicle of what Aztecs were like. Born to ordinary parents and afflicted with poor sight, Mixtli nonetheless rises quickly through the hierarchy of Mexican society, becoming a scribe, a wealthy trader, a renowned warrior, and eventually a lord of Tenochtitlan and a highly-respected councilor to Moctezuma II. The novel chronicles Mixtli's many adventures, which will take them through all of the Aztec Empire ("The One World") and beyond. The 'composer' of the novel, Bishop Juan de Zumárraga, is often commented upon by the narrator, who notes when the Bishop arrives to hear generally lurid details of human sacrifice and sexual impropriety, and often leaves just as quickly in disgust. The Bishop's introductions to the various chapters of the chronicle often express his loathing for Mixtli and his weariness with recording what he considers to be the...
Read More