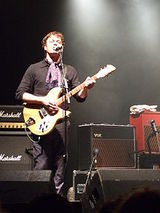 Babyshambles are an English<!-- do not edit: see Talk page --> indie rock band established in London. The band was formed by Pete Doherty during a hiatus from his former band The Libertines, but Babyshambles has since become his main project (although recently he has been focusing on his solo work and possibly a full-time Libertines re-union). Babyshambles has released two albums, three EP's and a number of single. The band has received a great deal of attention from the British tabloid press as a result of interest in Doherty's personal life.

In mid- 2003, Pete Doherty was banned from playing with The Libertines until he could overcome his substance abuse problems. As a response, Doherty formed an alternate band, and recruited former Libertines lineup man, Steve Bedlow as vocalist. Initially, Doherty planned on calling his new band "T' Libertines", because of the band's Yorkshire connection - the line up of the band at the time consisted mainly of Yorkshiremen.On the night Babyshambles' first gig was scheduled to take place, Doherty was arrested for burgling Carl Barât's flat. After he was charged and released, his friend Dean Fragile organized a new gig at the Tap'n'Tin. The performance received mixed reviews.

Doherty was sentenced to six months imprisonment for his crime. His sentence was later reduced on appeal to two months. When he was released...
Read More