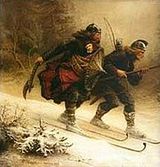 Description:
The Bagli Party or Bagler (Norwegian: Baglerne) was a faction or party during the Norwegian Civil Wars. The Bagler faction was made up principally of the Norwegian aristocracy, clergy and merchants.

It was formed in Skåne, then part of Denmark, in 1196 principally by Bishop Nicholas Arnesson of Oslo and Archbishop Erik Ivarsson of Nidaros around the pretender Inge Magnusson (nicknamed the Baglar-King) to depose King Sverre Sigurdsson. It contested with the Birkebeiners, essentially a faction of peasants, led by the pretender King Sverre, for control in a Norwegian civil war during the late 12th century. Sverris saga provided Sverre a royal lineage as putative bastard son of the late king Sigurd II of Norway, which in the Norway of the time provided him a claim to the throne. Historians generally agree with the consensus of his time that he was a pretender/ impostor.

The civil wars period of Norwegian history lasted from 1130 to 1217. During this period there were several interlocked conflicts of varying scale and intensity. The background for these conflicts were the unclear Norwegian succession laws, social conditions and the struggle between church and king. There were then two main parties, firstly known by varying names or no names at all, but finally condensed into parties of Bagler and Birkebeiner. The rallying point regularly was a royal son, who was set up as the head figure of the party in question, to oppose the rule of the king from the contesting party.