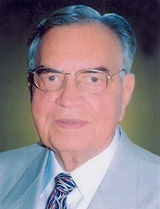 He was born in Jat family of Jakhar clan in Panchkosi village of Ferozepur district in Punjab now in abohar on 23 August 1923. His father’s name is Chaudhari Rajaram Jakhar and mother’s name is Patodevi Jakhar. His present generation (Ch. Sunil Jakhar) is serving as politicians in and near Abohar city which is Sub Tehsil for his native village Panjkosi. His son Surender kumar Jakhar died of a gunshot wound while cleaning in Abohar, firozpur on Monday 17th January 2011. His elder son Sajjan Kumar Jakhar is ex-punjab minister and known for clean image and is looked with respect by all political party leaders.

Jakhar earned a degree in Sanskrit from Foreman Christian College, Lahore, in 1945. He has knowledge of English, Punjabi, Urdu, Sanskrit and Hindi languages.