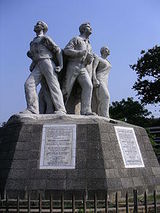 Description:
Bangladesh Students' Union is a left-leaning political organization in Bangladesh. It was established on 26 April 1952.

BSU functions as an independent secular students' organisation for the student right as an interest group. During the Liberation War, BSU had its own guerrilla units. In 1 January 1973 Motiul & Kader martyed to show the anti-imperialist movement by a procession in Dhaka against the Vietnam aggression by America. Motiul & Kader are given the honour of National Hero by Vietnam.

The Central Executive Body of BSU consists of 41 members.Current President is Manabendra Dev,General Secretary is Fardous Ahemed Uzzal and Organizing Secretary SM Suvo.Bangladesh Students` Union (BSU) was instituted in 1952.This organization is one of the leading student’s organizations in Bangladesh. It is working for students and youth right as a secular and progressive student’s organization in Bangladesh as well as all over the world as the member of several international students and youth organization. Bangladesh Students' Union (BSU) is working as the most conscious, advanced and struggling progressive representative of the students of Bangladesh, independent, unique, democratic, pluralistic, non-profit, non-governmental, non-partisan student organization which would embrace, represent and defend the interests of students and their rights.

This organization is fighting against racial oppression, communal, imperialist conspiracy and neo-colonic oppression from its birth....
Read More