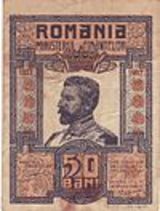 Banknotes Of The Romanian Leu

Banknotes of the Romanian leu

Banknotes of the first leu (RON)

Issued in Iaşi, during World War I by the Ministry of Finance, as war money. The banknotes represent the subdivision of the leu, the ban (pl. bani).

Bankotes of the third leu (ROL)

Banknotes of the fourth leu (RON)

The leu notes issued on 1 July 2005 are of equal size to euro banknotes, so that machines will need less refitting once Romania joins the euro zone. This decision was taken after a lot of debate, and with some opposition, the initial decision being to make them even smaller, similar to the 1966 series. The old leu notes are rather long and fairly uncomfortable to carry.

The design of the notes follows some common guidelines: the obverse shows a flower native to Romania and the portrait of a Romanian cultural personality; the reverse shows a building or a well-known...
Read More