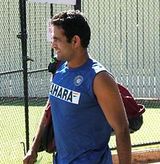 Description:
The Baroda cricket team is a domestic cricket team based in the city of Vadodara. The home ground of the team is the Moti Bagh Stadium on the palace grounds. The team is run by the Baroda Cricket Association. It has been one of the most successful teams in the Ranji Trophy in the new millennium. Although there are very few notable cricket players in history that have played for this team based in Gujarat, it has begun producing some of the most talented cricketers in India and is particularly noted for its fast bowlers. Baroda were runners-up in the 2005/06 Ranji Trophy. It is one of three Gujarat Teams, the others being the Saurashtra cricket team and Gujarat cricket team

Baroda has only emerged as a strong team in recent years. It won its first Ranji Trophy in 43 years in 2000-01, but failed to defend the title, coming runner-up in the next year. This means it has had only one Irani Trophy appearance, in which it failed to defeat a strong Rest of India team which contained the likes of VVS Laxman (13 & 148), Dinesh Mongia (125 & 90*), Debashish Mohanty, Sarandeep Singh and Akash Chopra. . It was considered a strong team in the 40s and 50s, winning 4 times and coming runner-up twice.Vijay Hazare, Irfan Pathan ,Yusuf Pathan are amongst the most prominent cricketers to emerge from Baroda.They have performed exceedingly well at the international level for India.