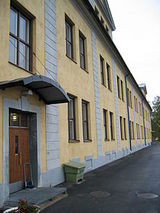 Description:
Barracks are specialised buildings for permanent military accommodation; the word may apply to separate housing blocks or to complete complexes. Their main object is to separate soldiers from the civilian population and reinforce discipline, training and esprit de corps. They were sometimes called discipline factories for soldiers. Like industrial factories, they are sometimes synonymous with shoddy or dull buildings although there are examples of magnificent architecture such as the Collins barracks and others in Paris, Berlin, Madrid, Vienna or London.

Early barracks such as those of the Roman Praetorian Guard were built to maintain elite forces. There are a number of remains of Roman army barracks in frontier forts such as Vercovicium and Vindolanda. From these and from contemporary Roman sources we can see that the basics of life in a military camp have remained constant for thousands of years.In the early modern period they formed part of the 'Military Revolution' that scholars believe contributed decisively to the formation of the nation state Roberts, Michael The Military Revolution, 1560-1660 (Belfast, 1956); reprinted with some amendments in Rogers, Clifford, ed., The Military Revolution Debate Rogers,...
Read More