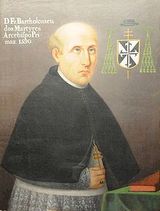 Description:
Blessed Bartholomew of Braga, later known as Bartolomeus a Martyribus (Bartolomeu dos Mártires in Portuguese), out of veneration for the church in which he was baptized, was a Portuguese Dominican theologian and Archbishop of Braga.

Bartolomeu Fernandes was born at Verdela, near Lisbon in May 1514, of humble parentage. He entered the Dominican Order on 11 November 1527, and was professed 20 November 1529. On the completion of his studies, he taught philosophy in the monastery at Lisbon, and then for about twenty years theology in various houses of his order. In 1551 he received the Master's degree at the provincial chapter of Salamanca in Spain.

While teaching theology in the monastery of Batalha, he was summoned to Évora by the Infante Dom Luis to undertake the religious education of his son, Dom António, who was entering the ecclesiastical state. He devoted two years to this task. In 1558, against his own desires, and only out of obedience to his provincial superior, Luis of Granada, he accepted the appointment to the archiepiscopal see of Braga, for which he had been chosen by Queen Catherine, and in 1559 received episcopal consecration. With true apostolic zeal he devoted himself to the duties of his new office.

On the resumption of the General Council of Trent in 1561, Bartholomew repaired to the council and took part in the last sessions. He was highly esteemed among the Fathers of the council, both on account of his theological learning and the holiness...
Read More