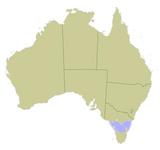 Description:
The Bass Strait Triangle is a term for the waters that separate the states of Victoria and Tasmania, including Bass Strait, in south-eastern Australia. Inspired by the Bermuda Triangle, the term appears to have been first used following the Valentich Disappearance in 1978 although the region had a bad reputation (never ascribed to supernatural forces, however) long before that.

Bass Strait is a generally shallow (average depth of ) stretch of water approximately wide and from north to south, encompassed by the entire northern coastline of Tasmania and central to eastern coast of Victoria. The prevailing winds and currents are westerly, the latter being divided by King Island, Tasmania at the western entrance to the strait, causing unpredictable sea conditions, especially when strong winds occur. For example, strong southerly winds can cause a strong northerly current reflecting from the Victorian coast. The combination of winds, currents, tidal flow and the shallow bottom often lead to tall waves, often of short length, with a confused short swell often conflicting in direction.

All shipping to the busy ports of Melbourne, Stanley, Burnie, Devonport, Bell Bay and Launceston and the Bass Strait islands such as King Island and Flinders Island must pass through Bass Strait, and it is also the route of choice for many ships passing from the Australian west to east coasts. Most air traffic between Tasmania and the Australian mainland flies at least in...
Read More