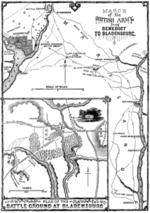 Description:
The Battle of Bladensburg took place during the War of 1812. The defeat of the American forces there allowed the British to capture and burn the public buildings of Washington, D.C. It has been called "the greatest disgrace ever dealt to American arms."

For the first two years of the War of 1812, the British had been preoccupied with the war against Napoleon Bonaparte on the continent of Europe. Although the Royal Navy controlled Chesapeake Bay from early 1813 onwards, lack of troops restricted them to mounting comparatively small-scale raids, the largest of which was the Battle of Craney Island, which involved 2,000 troops from the British Army and Royal Marines.

By April 1814, Napoleon had been defeated and was exiled to the island of Elba. Large numbers of British troops were free to be sent to North America. Lieutenant General Sir George Prevost, the Governor General of Canada and commander in chief in North America, planned for a dual invasion of the United States. He personally led one invasion into the state of New York from Canada, headed for Lake Champlain. Meanwhile, a brigade under Major General Robert Ross, consisting entirely of veterans from the army of the Duke of Wellington, was transported to Chesapeake Bay to "effect a diversion on the coasts of the United States of America in favor (sic) of the army employed in the defence of Upper and Lower Canada."Hitsman, p.240....
Read More