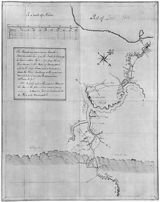 Description:
The Battle of Jumonville Glen, also known as the Jumonville affair, was the opening battle of the French and Indian War fought on May 28, 1754 near what is present-day Uniontown in Fayette County, Pennsylvania. A company of colonial militia from Virginia under the command of Lieutenant Colonel George Washington, and a small number of Mingo warriors led by Tanacharison (also known as "Half King"), ambushed a force of 35 Canadiens under the command of Joseph Coulon de Villiers de Jumonville.

The British colonial force had been sent to protect a fort under construction under the auspices of the Ohio Company at the location of present-day Pittsburgh, Pennsylvania. A larger Canadien force had driven off the small construction crew, and sent Jumonville to warn Washington about encroaching on French-claimed territory. Washington was alerted to Jumonville's presence by Tanacharison, and they joined forces to surround the Canadian camp. Some of the Canadians were killed in the ambush, and most of the others were captured. Jumonville was among the slain, although the exact circumstances of his death are a subject of historical controversy and debate.

Since Britain and France were not then at war, the event had international repercussions, and was a contributing factor in the start of the Seven Years' War in 1756. After the action, Washington retreated to Fort Necessity, where Canadian forces from Fort Duquesne compelled his surrender. The terms of Washington's surrender...
Read More