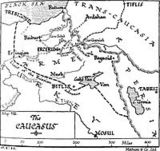 The Battle of Manzikert or Battle of Malazgirt (Turkish: Malazgirt MuharebesiFahri Belen, XX. Yüzyılda Osmanlı Devleti, Remzi Kitabevi, 1975, ) was a battle of the Caucasus Campaign of World War I, in 1915. Even though losses were heavy on both sides, the ground situation changed little by the end of the action.

On July 10, 1915, Russian General Oganovski launched an offensive to capture the hills just west of Malazgirt. He believed that the Turkish forces in the area were weak. However the Turkish forces contained several divisions numbering upwards of 40,000 men which was not known to the Russians. On July 16, the Ottoman Army counter-attacked under Abdul Kerim Pasha. They outnumbered the Russians by a factor of 3-1. Oganovski was forced to retreat back to Malazgirt, and in the process the Turks captured his baggage train. on July 20, the Russians were driven from Malazgirt. Yudenich, who was the Russian commander of the Caucasus front, due to the bad quality of the Russian communications, did not learn that the Russian army was in retreat until July 22.

Yudenich quickly regrouped his forces, fired Oganovski, and launched a counter-offensive. Russian casualties were reported to be about 10,000. Malazgirt was recaptured but Yudenich did not have a large enough force to exploit the situation further.

The Russian army, in Malazgirt, was outnumbered 3-1 by the Ottoman army. Realizing that if the Ottomans...
Read More