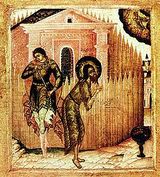 Beheading Of St. John The Baptist

Beheading of St. John the Baptist

The biblical account portrays the beheading of Saint John the Baptist by Herod Antipas. According to the Synoptic Gospels, Herod had imprisoned John because he reproved Herod for divorcing his wife (Phasaelis), and unlawfully taking Herodias, the wife of his brother Herod Philip I. On Herod's birthday, Herodias' daughter (traditionally named Salome) danced before the king and his guests. Her dancing pleased Herod so much that in his drunkenness he promised to give her anything she desired, up to half of his kingdom. When the daughter asked her mother what she should request, she was told to ask for the head of John the Baptist on a platter. Although Herod was appalled by the request, he reluctantly agreed and had John executed in the prison.

The Jewish historian Flavius Josephus also relates in his Antiquities of the Jews that Herod killed John, stating that he did so, "lest the great influence John had over the people might put it into his power and inclination to raise a rebellion, (for they seemed ready to do any thing he should advise), thought it best him to death." He further states that many of the Jews believed that the military disaster...
Read More