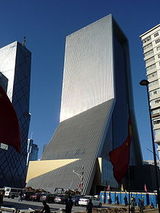 At 8:27 p.m. on 9 February 2009, the entire building caught fire on the last day of the festivities marking the Chinese new year and was put out six hours later. A nearby unauthorised fireworks display caused the fire.

The incident, and its coverage by Chinese state media, caused a furore in China. CCTV officials had authorised the powerful pyrotechnics, carried it out without the required permit from local government, and ignored repeated police warnings not to hold them. The authorities' attempts to limit damaging direct coverage of the blaze was criticised by citizens and the international press.

Construction was started in 2004 and was expected to be completed in May 2009. The building was to be named "Television Cultural Center", TVCC, with the Beijing Mandarin Oriental being its main tenant.

Its nicknames include the Termite's Nest or the Boot because of its radical design. The building, along with the CCTV Headquarters Building, was built...
Read More