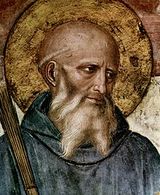 Description:
Benedictine refers to the spirituality and consecrated life in accordance with the Rule of St Benedict, written by Benedict of Nursia in the sixth century for the cenobitic communities he founded in central Italy. The most notable of these is Monte Cassino, the first monastery founded by Benedict around 529.

Used as a noun, the term Benedictine denotes membership in the order. By extension it is sometimes applied to other adherents of the Benedictine spirituality.

The current Abbot Primate of the global Benedictine Confederation of the Order of St. Benedict is a German Benedictine, Notker Wolf. The center of the Confederation is Sant'Anselmo in Rome where every four years the abbots of the Benedictine order from around the world meet for a Confederation Congress. In 2000, there were 8,182...
Read More