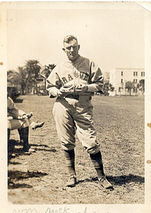 Description:
William Boyd McKechnie (August 7, 1886 – October 29, 1965) was an American third baseman, manager and coach in Major League Baseball. He was the first manager to win World Series titles with two different teams (1925 Pittsburgh Pirates and 1940 Cincinnati Reds), and remains one of only two managers to win pennants with three teams, also capturing the National League title in 1928 with the St. Louis Cardinals. His 1,892 career victories ranked fourth in major league history when he ended his managing career in 1946, and trailed only John McGraw's NL total of 2,669 in league history. He was nicknamed "Deacon" because he sang in his church choir and generally lived a quiet life.

Born in Wilkinsburg, Pennsylvania, McKechnie made his major league debut in with the Pittsburgh Pirates, appearing in three games, before reemerging with the team in in a more substantial role. A utility infielder for the first half of his career before playing more substantially at third base later on, McKechnie played with the Pirates (1907, 1910–, , ), Boston Braves (), New York Yankees (1913), Indianapolis Hoosiers/Newark Pepper ( – ), New York Giants () and Cincinnati Reds (1916 – ). His best offensive season came in 1914 with the Hoosiers, when scored 107 runs, batted .304 and stole 47 bases.

McKechnie got his first taste of managerial duties in 1915 when he managed 102 games for the Newark Pepper, leading the team to a 54–45 record. Shortly after retiring as a player...
Read More