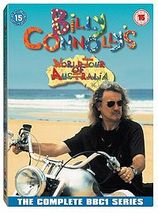 Description:
Billy Connolly's World Tour of Australia is the second in a line of ‘world tours’ that follow comedian Billy Connolly on his various travels across the globe.

Filmed over four months in 1995, Connolly takes the viewer on a scenic and informative tour of Australia, a country he first visited in the 1970s, intercut with scenes from his stand-up comedy act at various venues around the country. The tour takes in Sydney, Canberra, Melbourne, Adelaide, Perth, Darwin, Alice Springs and Fraser Island. On the way, Connolly also experiences and demonstrates several Australian customs, traditions, and attractions, including swimming with the dolphins in Perth, eating a pie floater in Adelaide, and visiting several museums and galleries, most of which feature some form of Aboriginal art.

The DVD box-set of the series, released in 2004, contains two disks, each featuring four episodes of the tour. The opening titles feature an Aboriginal man playing a didgeridoo in the foreground, while in the background Connolly drives his Harley-Davidson trike (on which he travels throughout the series, with his learner's badge attached to its rear) towards and past the camera. The first disc focuses mainly on the southeastern coast of Australia, with Connolly visiting such places as Melbourne, Sydney and Newcastle, while the second disc focuses on Adelaide, Perth, Brisbane and rural Australia.

Episode 1:Connolly introduces himself and his tour with a preview of where he and his team...
Read More