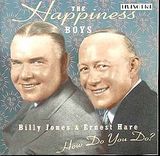 Jones worked in such occupations as mining, banking, and blacksmithing before his 1918 recording debut. He recorded with the Cleartone Four, the Crescent Trio, the Harmonizers Quartet and the Premier Quartet, and he performed under a variety of names (Harry Blake, Billy Clarke, Lester George, Duncan Jones, Reese Jones, John Kelley, Dennis O'Malley, William Rees, Victor Roberts, Billy West, William West, and Carlton Williams).

After he met Ernie Hare in 1919, they teamed in 1920 when Brunswick executive Gus Haenschen had them sing an accompaniment on a Brunswick Records recording. They went on to do numerous recordings together for Brunswick, Edison, and other companies.

They began on radio October 18, 1921 on WJZ (Newark, New Jersey). Sponsored by the chain of Happiness Candy stores, they were heard on The Happiness Boys program beginning August 22, 1923 on New York's WEAF, moving to NBC from a run from 1926 to 1929. As "The Happiness Boys", they sang popular tunes, mostly light fare and comic songs, and they joked with one another between numbers.