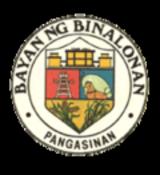 Description:
Binalonan is a municipality geographically located in the province of Pangasinan in the Philippines. At present it is becoming one of the province’s top producers of rice grains (palay) and mangoes. The town is known for its rich history rooted in oral traditions of folklore. One of Binalonan's prides is the famed Filipino-American writer Carlos Bulosan, who wrote brief descriptions of the town’s history and people in his semi-autobiographical novel entitled America is in the Heart. The town has a memorial and street named after him just north of the municipal hall and town market. It is also the hometown of Evangelina de la Cruz Macaraeg Macapagal, spouse of 9th President Diosdado Macapagal, and mother of 14th President Gloria Macapagal-Arroyo.

According to historians, the town's name is an evolution of the Ilocano term balon, which means "packed lunch", or in Tagalog, baon.

In a traditional story, which now plays an important role in the town's history, the area was originally owned by a Spaniard named Don Salvador. It was told that he instructed his men to put up crude wooden fences along the property to establish his ownership. During the course of their work, Don Salvador's men used to have their lunch and rest under Camachile trees located in the center of the land mainly due to its breezy shades.

Time came when Don Salvador offered his pastureland to several immigrants from Ilocos. When they asked Don Salcador how they were going to find...
Read More