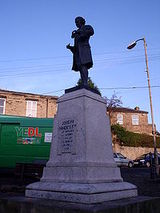 Description:
Birstall is a large village in the metropolitan borough of Kirklees, West Yorkshire, England and situated roughly 6 miles south-west of Leeds. It features a quaint triangular Victorian marketplace, which replaced an earlier market on High Street in the Georgian area of the village further up the hill. There is still a market on Thursdays.

Situated centrally between Leeds, Bradford, Huddersfield and Wakefield close to the M62 motorway, Birstall has always benefited from good transport links but more recently has seen massive growth because of the expansion of Leeds resulting in a growth of commuters wishing to live in more rural surroundings. At its outskirts, there is also a retail park featuring an IKEA store, Habitat, Next and Showcase Cinemas complex.

Birstall does not feature in the Domesday Book but is alluded to as one of two main settlements within Gomersal, and was listed in 'Pigot's National Commercial Directory for 1828-29' as one of the four villages which make up the township of Gomersal.

Prior to 1937, Birstall had its own Urban District Council when financial discrepancies forced an unpopular merger with the UDC of neighbouring Batley. Just over 30 years later, this, in turn was merged into Kirklees when the metropolitan councils were formed.

The Yorkshire Dictionary stated that there was once a common phrase cahr quiet li' the' do i' Birstall. However, no reason was given for why Birstall was associated with keeping quiet, although locals insist that it is...
Read More