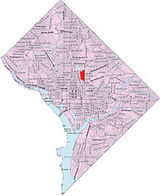 Most of the homes within Bloomingdale are rowhouses built around 1900 and are in the Victorian style. Nearby neighborhoods that border on Bloomingdale are Pleasant Plains to the northwest, LeDroit Park to the west, Eckington to the east, Shaw to the southwest, and Truxton Circle to the southeast.