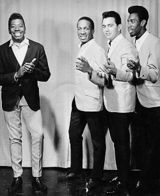 Description:
Bobby Taylor & the Vancouvers were a soul band from Vancouver, British Columbia. Briefly signed to Motown Records in the late 1960s, they had one top 30 hit single, "Does Your Mama Know About Me". As a producer and solo artist, Bobby Taylor contributed to several other soul recordings, both inside and outside of Motown. Taylor is most notable for discovering and mentoring The Jackson 5. Tommy Chong was a member of Bobby Taylor & the Vancouvers before he became famous as a comedian.

Bobby Taylor, born February 18, 1934 in Washington, DC, was raised in Washington. As a young man, he moved to New York City and sang in doo-wop groups with singers who later joined successful acts such as Frankie Lymon & the Teenagers and Little Anthony & the Imperials. In 1958 he began his music career as a member of The Four Pharaohs, who released a few locally-selling recordings in the Columbus, Ohio area.

In the early 1960s, while they were in San Francisco, Taylor met Little Daddy and the Bachelors, made up of vocalist Tommie Melton, guitarist Tommy Chong, bassist Wes Henderson, pianist Bernie Sneed, drummer Floyd Sneed (later the drummer for Three Dog Night) While in Calgary they were known as the...
Read More