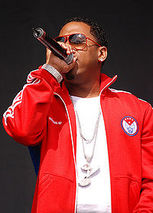 Description:
Bobby Wilson (born on February 27, 1980), better known by his stage name Bobby V (previously known as Bobby Valentino), is an American recording artist (his nickname being "Valentino" because he was due to be born on Valentine's Day). He is now known as Bobby V due to a lawsuit involving an English singer, song writer and musician who has been recording and performing under the name Bobby Valentino for over 35 years.

Bobby V was born Robert Wilson on February 27, 1980, in Jackson, Mississippi. He later moved to Atlanta, Georgia where he attended North Atlanta High School. Growing up V listened to Michael Jackson, Tony! Toni! Tone!, Marvin Gaye, Jodeci, and The Isley Brothers. Those were the artists that inspired him to become a R&B singer. He later returned to his old high school appearing on the debut episode of MTV's , which aired on May 19, 2007. V entered the music scene in 1996 as a member of the R&B youth quartet Mista, at this time using his real name, Bobby Wilson. Under the production of Organized Noize (TLC’s "Waterfalls"), the group released their self-titled debut album, which produced the chart topping single, "Blackberry Molasses". Unfortunately, the album did not follow in the same success and despite a second...
Read More