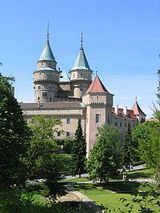 Description:
Bojnice Castle (Slovak: Bojnický zámok, Hungarian: Bajmóc) is a castle in Bojnice, Slovakia. It hosts the single most popular museum in Slovakia and has featured in many movies.

Bojnice Castle was first mentioned in written records in 1113, in a document held at the Zobor Abbey. Originally built as a wooden fort, it was gradually replaced by stone, with the outer walls being shaped according to he uneven rocky terrain. Its first owner was Máté Csák, who received it in 1302 from the King Ladislaus V of Hungary. Later, in the 15th century, it was owned by King Matthias Corvinus, who gave it to his illegitimate son John Corvinus in 1489. Matthias liked to visit Bojnice and it was here that he worked on his royal decrees. He used to dictate them under his beloved linden tree, which is now known as the "Linden tree of King Matthias". After his death the castle became the property of the Zapolya family (see John Zapolya). The Thurzos, the richest family in the northern Kingdom of Hungary (now Slovakia), acquired the castle in 1528 and undertook its major reconstruction. The former fortress was turned into a Renaissance castle. From 1646 on, the castle's owners were the Palffys, who continued to rebuild the castle.

Finally, the last famous castle owner from the Palffy family, John Palffy (1829-1908), made a complex romantic reconstruction from 1888 to 1909 and created today's beautiful imitation of French castles of the Loire valley. He not only had the castle built,...
Read More