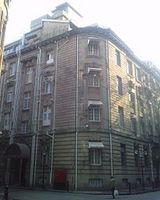 Situated near Flora Fountain it was completed in 1924 and has been the Tata Group's headquarters ever since. The building is a four story colonial structure built with Malad stone, and was designed by architect George Wittet, who later became the head of Tata Engineering Company Limited, now Tata Motors.

A plot of ground measuring was put up by the Bombay Municipality for sale in Bombay and then purchased by the Tata Group. It was observed that the various Tata concerns could not be accommodated in Navsari buildings and Navsari Chambers which they had been occupying since 1904.