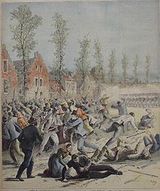 Description:
The Borinage is an area in the Walloon province of Hainaut. The provincial capital Mons is located in the east of the Borinage. In French the inhabitants are called Borains. But there was a great sociological difference between Mons and the Borains of all the villages around Mons.

Charles White wrote for the Belgian revolution: The Borains, like the dark spirits of the melo-drame, rose from their mines, and helter-skelter pushed upon the capitalCharles White, The Belgic revolution of 1830, London, 1835, p. 308 But he was using this name for all the inhabitants in the Province of Hainaut which is an error.

Only coal-mining in the beginning and in the end

From the 18th century to 1850, the economy of thirty municipalities in the Borinage was founded on coal mining. Between 1822 and 1829, production more than doubled in that region i.e. from 602.000 to 1.260.000 tons. That was more than the total production of France and Germany at the time! The Borinage exported its coal mostly to France and Flanders... Adriaan Linters, Architecture industrielle en Belgique, Industriële architectuur in België, Industria architecture in Belgium, Pierre Mardaga, Liège, 1986, ISBN 2-87009-284-9