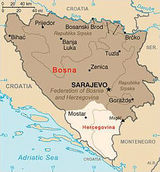 Description:
Bosnia (; , ) is a eponomous region of Bosnia and Herzegovina. It lies mainly in the Dinaric Alps, ranging to the southern borders of the Pannonian plain, with the rivers Sava and Drina marking its northern and eastern borders. The other eponomous region, the southern, other half of the country is Herzegovina. Bosnia is in formal use for the whole country.

The two regions have formed a geopolitical entity since medieval times, and the name "Bosnia" commonly occurs in historical and geopolitical senses as generally referring to both regions (Bosnia and Herzegovina). The official use of the name including both regions started only in the late period of Ottoman-rule.

The Bosnian kingdom included most of the territory of today's Bosnia and of what would later become known as Herzegovina.

After losing its independence to the Ottoman Empire in 1463, Bosnia (including Herzegovina) was a state (sanjak) within the empire for four centuries. The area acquired the name of "Bosnia and Herzegovina" in 1853 as a result of a twist in political events.

The Austro-Hungarian Empire occupied it in 1878...
Read More