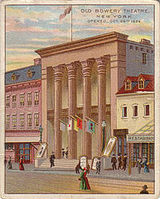 Description:
The Bowery Theatre was a playhouse in the Bowery neighborhood of New York City. Although it was founded by rich families to compete with the upscale Park Theatre, the Bowery saw its most successful period under the populist, pro-American management of Thomas Hamblin in the 1830s and 1840s. By the 1850s, the theatre came to cater to immigrant groups such as the Irish, Germans, and Chinese. It burnt down 5 times in 17 years, a fire in 1929 destroying it for good. Although the theatre's name changed several times (Thalia Theatre, Fay's Bowery Theatre, etc.), it was generally referred to as the "Bowery Theatre".

By the mid-1820s, wealthy settler families in the new ward that was made fashionable by the opening of Lafayette Street, parallel to the Bowery, wanted easy access to fashionable high-class European drama, then only available at the Park Theatre. Under the leadership of Henry Astor, they formed the New York Association and bought the land where Astor's Bull's Head tavern stood, facing the neighborhood and occupying the area between Elizabeth, Canal, and Hester streets. They hired architects Ithiel Town and John Trimble to design the new venue.Some notable investors included Samuel Laurence Gouverneur, son-in-law to President James Monroe, and James......
Read More