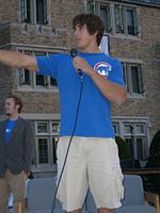 Description:
Brayden Tyler "Brady" Quinn (born October 27, 1984) is an American football quarterback for the Denver Broncos of the National Football League. Quinn was drafted by the Cleveland Browns in the first round of the 2007 NFL Draft. He played college football at Notre Dame.

Quinn attended Dublin Coffman High School in Dublin, Ohio, and ranked sixth on the Detroit Free Press "Best of the Midwest" team and was listed at number 20 on ESPN's list of the nation's top 100 players as a preparatory student.

As a high school junior in 2001 , he was able to throw for 2,200 yards and 21 touchdowns to go along with 15 interceptions, posting a 9–4 record with which Coffman reached the Division I state semi-finals. As a senior in 2002 , he threw for 2,149 yards, completing 143 of 258 pass attempts, and he threw 25 touchdowns with four interceptions while rushing for 108 yards and six touchdowns. Quinn helped his team post an 8–3 record and played in the U.S. Army All-American Bowl in San Antonio, Texas. Quinn was named the Columbus Dispatch and...
Read More