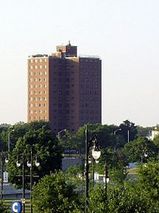 Description:
Brewster-Douglass Housing Projects were the largest residential housing project owned by the city of Detroit, located in the Brush Park section on the east side of Detroit, Michigan near the Chrysler Freeway, Mack Avenue and St. Antoine Street. The housing project is named after Frederick Douglass, African American abolitionist, author, and reformer. The projects are at present mostly abandoned, with the exception of the townhomes built in 1995.

The complex was home to such notable figures as Diana Ross, Mary Wilson, Florence Ballard, Lily Tomlin, and Smokey Robinson during their early years. The claymation animated series The PJ's was based on the housing project as well. It was also seen in a screenshots for the movie Dreamgirls as well as D12's debut music video. RuPaul mentions the Brewster Projects in the intro of the 1992 song "Supermodel ".

The Brewster Project and Frederick Douglass Apartments were built between 1935 and 1955 and designed by Harley, Ellington & Day of Detroit. The Brewster Project began construction in 1935 when First Lady Eleanor Roosevelt broke ground for the 701-unit development; this first phase, consisting of low-rise apartment blocks, was completed in 1938. An expansion of the project completed in 1941 brought the total number of housing units to 941. The Frederick Douglass Apartments, built immediately to the south of the Brewster Project, began construction in 1942 with the completion of apartment rows, two 6-story...
Read More