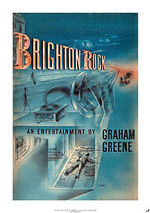 Description:
Brighton Rock is a novel by Graham Greene, published in 1938, and later made into films, a 1947 film and a 2011 film. The novel is a murder thriller set in 1930s Brighton. The title is a reference to a confectionery traditionally sold at seaside resorts, used as a metaphor for human character.

Charles "Fred" Hale comes to Brighton on assignment to anonymously distribute cards for a newspaper competition (this is a variant of "Lobby Lud" in which the name of the person to be spotted is "Kolley Kibber"). The antihero of the novel, Pinkie Brown, is a teenage sociopath and up-and-coming gangster. Hale had betrayed the former leader of the gang Pinkie now controls. Ida Arnold, a kind-hearted and decent woman, is drawn into the action by a chance meeting with the terrified Hale, whom Pinkie murders in obscure circumstances shortly afterwards. Pinkie's attempts to cover his tracks lead to a chain of fresh crimes and to an ill-fated marriage to Rose, a waitress who has the power to destroy his alibi. Ida pursues Pinkie relentlessly, in part to protect Rose from the deeply disturbed boy she has married.

Although ostensibly an underworld thriller, the book is also a challenge to Roman Catholic doctrine concerning the nature of sin and the basis of morality. Pinkie and Rose are Catholics, as was Greene, and their beliefs are contrasted with Ida's strong but non-religious moral sensibility.

Pinkie: The anti-hero of the...
Read More