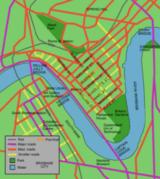 The Brisbane CBD is an area of densely concentrated skyscrapers and other buildings, interspersed by several parks such as Roma Street Parklands, City Botanic Gardens and Wickham Park. The City is laid out according to a grid pattern surveyed during the city's early colonial days, a feature typical of most Australian street patterns. As a general rule, the streets aligned northwest-south east are named after male members of the House of Hanover, while the northeast-south west aligned streets are named after female members. Queen Street was the central roadway, that was turned into a pedestrian mall. It forms the pivotal axis for the grid of roads within the district.

The Brisbane central business district was built on a spur of the Taylor Range with the highest spot in the suburb being Wickham......
Read More