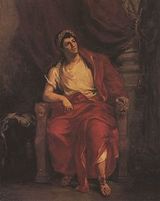 Description:
Britannicus is a tragic play by the French dramatist Jean Racine.

The play, produced in 1669, was the first time Racine had tried his hand at depicting Roman history. The tale of moral choice takes as its subject Britannicus, the son of the Roman emperor Claudius, and heir to the imperial throne. Britannicus' succession to the throne is however usurped by Lucius, later known as Nero, and the son of Claudius' wife Agrippina the Younger.

Racine portrays Nero's true nature as revealed by his sudden desire for Britannicus's fiancée Junia. He wrests himself free from his mother's domination and plots to assassinate his adoptive brother. Nero is driven less by fear of being overthrown by Britannicus than by competition in love. His desire for Junia manifests itself in sadism towards the young woman and all that she loves. Agrippina is portrayed as a possessive mother who will not accept the loss of control over both her son and the Empire. Despite giving his name to the play, the character of Britannicus is more minor in comparison to those of Agrippina and Nero.

Success only came to the play slowly, but of Racine's works, Britannicus is today second only to Andromaque amongst the repertory of the Comédie-Française, and is frequently studied in high school.

A modern translation-adaptation of the play has been published and premiered by the American playwright Howard Rubenstein.Britannicus: A play in two acts, adapted from Jean Racine’s Britannicus, Granite Hills Press,...
Read More